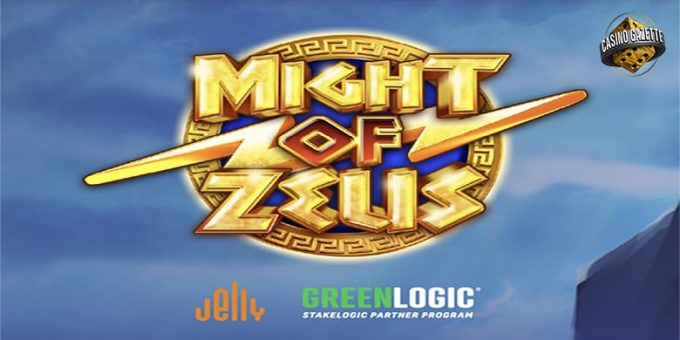 Online slot games based on Greek Mythology have always been popular with casino game studios and slot players alike, a fact not lost on Stakelogic who last week announced the release of their latest game, Might of Zeus.

Not to be confused with the arguably legendary Zeus Slot from WMS, which incidentally you are able to play for free within our Slots Lobby here on Casino Gazette.

Might of Zeus has been created as part of the Greenlogic® initiative – a partnership program which enables developers to focus on game concepts and designs while Stakelogic handles all the logic and back-office integration – the new slot is a Greek mythology-themed game that features five reels and a mighty 1,024 ways to win.

With the gameboard being fringed by ornate stone pillars and a backdrop depicting the stormy skies above Mount Olympus, Might of Zeus instantly sets the scene for the epic adventure ahead.

Unique symbols to feature on the reels include a colourful cast of Greek gods including Zeus, Hera and Poseidon, while even the regular playing card values have been given an ancient Athenian makeover.

On any given spin, players can randomly benefit from the Gift of Zeus feature, which sees the iconic god of the skies select one of his fellow subjects to become wild as a free re-spin is triggered.

If any instances of the chosen deity appear on the reels, they’ll lock in place as winning paylines are calculated and another re-spin is awarded – with this process continuing as long as new wilds appear.

In addition to that potentially lucrative in-game bonus, players will also be able to trigger Might of Zeus’ main Boon of Hera Free Spins feature.

Activated whenever lightning bolt scatters appear on the reels, players will be awarded 10 Free Spins with a new golden Hera symbol also coming into play.

This special icon will only appear on the game’s fifth reel, but any time it lands it will contribute to a collection metre at the top of the screen.

For every three steps players advance on the collection metre, they’ll win an additional prize, with further Free Spins and 3x win multipliers both up for grabs.

As an extra incentive, all regular wilds become 2x multipliers during Free Spins apart from when the Gift of Zeus feature is triggered, with these multipliers even combining when more than one appears.

Additionally, if players fall one symbol short of triggering Free Spins during the base game, the Bolt of Zeus feature can randomly activate and blast an extra scatter symbol onto the reels to get them there.

To round off what is already a Herculean bonus offering, players can also boost the value of any base game wins they collect in Stakelogic’s classic Gamble Feature.

Here, they’ll be asked to correctly guess the colour or suit of a hidden playing card to double or quadruple the value of their win respectively.

Salvatore Campione, Head of Greenlogic® at Stakelogic said: “Having already worked with Jelly on the hugely successful Jade Of The Jungle, we’re delighted to be teaming up with the talented studio once again to bring players another electrifying release in Might of Zeus.”

“The new game serves up a pantheon of thrilling features, all of which offer the possibility of god-like wins worth up to 7,163x their chosen bet.”